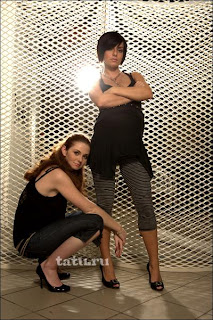 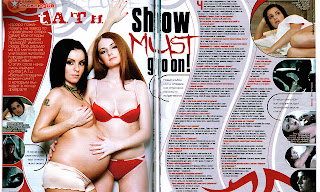 10.04.2008 - Women against AIDS
"Eyes To Eyes. Women Against AIDS" photo exhibition by Serge Golovach opens in Moscow Polytechnic Museum on April, 10. At this exhibition a series of panoramic portraits of HIV-positive women united to draw attention to this problem will be presented. There also will be portraits of well-known women, who supported the project. Part of the exhibition photos are published in April issue of L'Officiel magazine (Russia).

14.04.2008 - Goodyear Photoshoot
t.A.T.u. had a photoshoot for the Goodyear Calendar 2009. Photographer: Vladimir Byazrov

Download | Watch
The concert got delayed for a couple of hours because the generator got broken, so we were asked to come not to 9 but to 11 PM. By the time a bunch of the crowd got sick and tired (which is understandable). Lena and Julia got warned not to hug or kiss. But it didn't save a thing: the 70-minutes-long concert had to be shown on their local music channel (like what we had in Sankt-Peterburg in 2006), but Julia came on stage in a black see-through dress and then in a corset and panties, so the TV refused to show that (of course, everyone's been warned about the sexy image of our girls...)
By the way, the list of the songs got completely revamped for this show - the first song had to be "All The Things She Said" - as an experiment. I think in the special "egyptian" conditions this experiment turned successful.
there were lots of Russian people in the crowd, and not only tourists. You could hear them all singing "Nas ne dogonyat" quite clearly. Cool. There were also lots of cameras.  One more thing - the day before show the girls were asked to come to a TV show and officially state that they weren't lesbians. The girls refused.
Report by Zhenya Veovodina

"Beliy Plaschik", the lead single from their upcoming Russian-language album was released. The project was then known as "Upravleniye Otbrosami", which translates to "Waste Management". The second single, "220", made its radio premiere in May 2008 and the music video was released on their official YouTube channel on 5 June 2008. "Beliy Plaschik" and "220" were the main attractions on a special release known as "Hyperion-Plate", the first-ever EP from the duo. The EP was released on 8 May 2008 and featured multimedia content including music, video, ringtones and wallpapers

14.05.2008 - You and I Movie Premiere in Cannes, France
The movie 'You And I' has been pushed-back severely, but was eventually announced for releases. The film premiered at the 61st Cannes Film Festival in May 2008.


Cannes Film festival 2008 Party Majestic Hotel
t.A.T.u. performed in Cannes, during promotion of the movie "You and I", which was emited for the movie-critics in Europe Movie Capital. t.A.T.u. sang 220, White Robe and You and I.


17.05.2008 - San Bonifacio Concert, Italy
The concert took place in the Club Skylight. It was the first real concert of t.A.T.u. in Italy. The concert started at 2 AM.

21.05.2008 - Tiffany's cafe, St. Petersburg Russia
t.A.T.u. were supposed to begin their performance in "Tiffany's Cafe" in St. Petersburg at 21:00. Fifteen minutes before the performance was to begin, Julia announced that she felt bad and that her head was spinning. The organizers decided to immediately request an ambulance, so they did. The ambulance arrived after 20 minutes and planned to take Julia back to the hospital. The performance was on the edge of cancellation, however, in the last minute Lena announced that she is ready to perform alone, without Julia. Lena made this decision so that they wouldn't "betray" the organizers or turn their back on their fans, of which some came all the way from Finland. While the "redhead" performed some of their best songs from the old and the new album, the paramedics aided Julia. At last they decided to bring Julia to a hotel nearby, "HollidayClub". Due to the two-hour-postponement of the concert Lena was the victim of her own decision. When she, together with her colleagues, decided to return to the hotel, it turned out that bridges had been moved. So Lena and her colleagues could only return to the hotel not earlier than 3 in the morning, when the bridges would get moved back. Then Lena Katina and Julia Volkova returned to Moscow. Julia felt after come-back a lot better.


26.07.2008- Kazakhstan (Aktobe)
t.A.T.u. were the headliners of the Planet of Music Festival in Kazakhstan organized by The Coca-Cola Company.

Report
This day was supposed to be as usual as every of October. But a few days ago something happened... Something, that changed lifes of a few people from Poland. Warsaw became a place of making dream come true of some polish fans of t.A.T.u. group. Since we woke up, we felt the magic. Most of us woke up at 04:30 AM, short sleep didn't weaken us. Us? To see t.A.T.u. came two groups of fans. First group was from Zabrze, and there was Ralf from tatushow.com, Uncle Kamil from tatumusic.eu, and two other fans from this city. Train at 06:14 PM, we almost lost it. Train was about to leave, when Kamil was buying the ticket. Fortunately, he made it and joined us in the train. During our trip to Warsaw, we were talking about t.A.T.u., their management, and everything connected. Welcome Warsaw! Group from Zabrze started thinking about the gift for girls. There came an idea! Poland and Russia have common tradition - greeting them the bread, salt and.. vodka! We bought it in the centre of the city. Then we went for a train to come to "Institut of a Power Industry". Unfortunately, this train was delayed, and didn't come. At the train station, to our group joined Michael aka Tyraf. We found him on the train station, when Kamil played "You and I" from his mobile. We needed to change the train, we thought that in Warsaw is one type of train tickets, but unfortunately not... And in another train we were caught by Ticker Inspector... He didn't understand that we are not from Warsaw, we didn't know, and we asked for buying right ticket. He didn't help us, and gave us very rich financial punishments. It was not to understand for us, but... What could we do? To find this Institut was very, very hard. We would say that this concert was at the end of the world. We were forced to go in some shrubbery, but thinking "t.A.T.u.! t.A.T.u.!" was stronger. We finally came. We thought that we are too late, but not... we had to wait over two hours for t.A.T.u. First we were supposed to meet girls at 05:30 PM, but then we heard that girls "make their hair", and after a break we were supposed go to see their rehearsal. Unfortunately, girls spent a really long time in a backstage, preparing for the show. Suddenly came the organiser, and told us, that first will be rehearsal. When we come there, we saw t.A.T.u... This feeling was absolutely incredible. Now, you as a fan of this group, seeing them since long time on TV, or in internet, now everything changes... You see them. In person. This emotions are not to describe, girls were sitting in a VIP place. Every fan was shocked, and like in a magical situation. Then girls started the rehearsal. Lena and Julia looked more beautiful than in every picture. Many fans started to record it and took photos. Girls were satisfied, and they really liked our presence there. After a short time, girls came to the fans. Everyone started tooking photos and came closer to Julia and Lena. Fans asked, girls answered, signed posters, and gave autographs. My personal suggestion is that there were too many fans. This place was very small, and every fan wanted to have close contact. Sometimes fans did it very agressive. Every fan received poster, and autograph. t.A.T.u. said few words in polish like "hey" or "thank you". This meeting gave us a chance to have a little contact with them, to talk about Poland, their plans, Lena's Birthday. Fans sang for Lena polish "Happy Birthday". Our souvenir was a group-picture. After meeting, that lasted 20 minutes, we had to go, because then was "time for press". Girls gave few interviews for Interia.pl, Onet.pl, Plejada.pl, eFakt.pl, and others. Fans went to the concert-place. On TV performance looked really nice, but as a viewer in front of the stage, it looked weird. Girls performed as a last. Emotions were high. First was White Robe, then 220, t.A.T.u. threw away their robes, and crowd got crazy, about Moulin Rouge clothes. All The Things She Said was the last song, and definitely most liked, but they would prefer russian version. We hear from Julia "We're happy to be there again" and "Guys let's get party tonight" We had a lot of fun, it was one of the best moments in our lifes. We will never forget it. Like one fan said "Now for the next 6 years we will wake up every morning and telling OMG!" It was incredible! We want next concert! We should have this hope! That t.A.T.u. will come to our country, because concert in another country, is not the same as in homeland.

InteriaTV We Are Not Controversial 2008

11.10.2008 - Ukrainian Music Awards, Donetzk Ukraine
t.A.T.u. participated in ceremony of "Ukrainian European Television Music Awards" in the city of Donetsk. t.A.T.u. sang "You and I" and "All The Things She Said"

16.12.2008 - Evening with Neposedi
For the first time Julia shown her daughter Victoria, who was 4 years old back then, during a event of Neposedy. 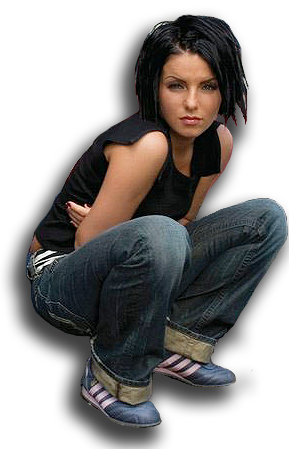